The Hardest Working Man in Bushcraft 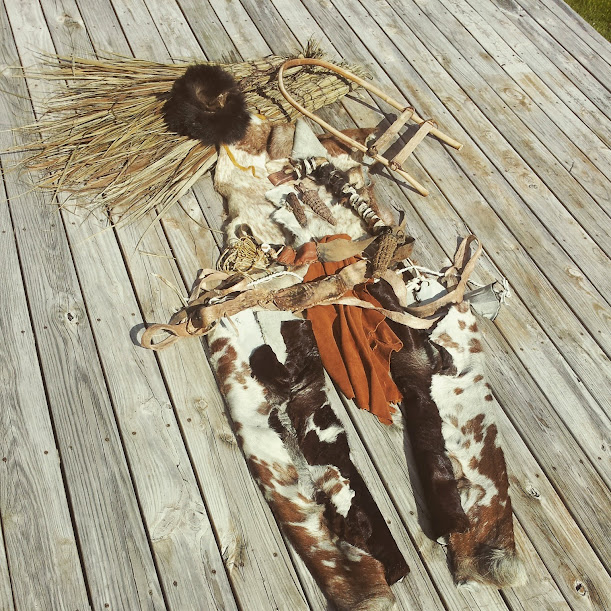 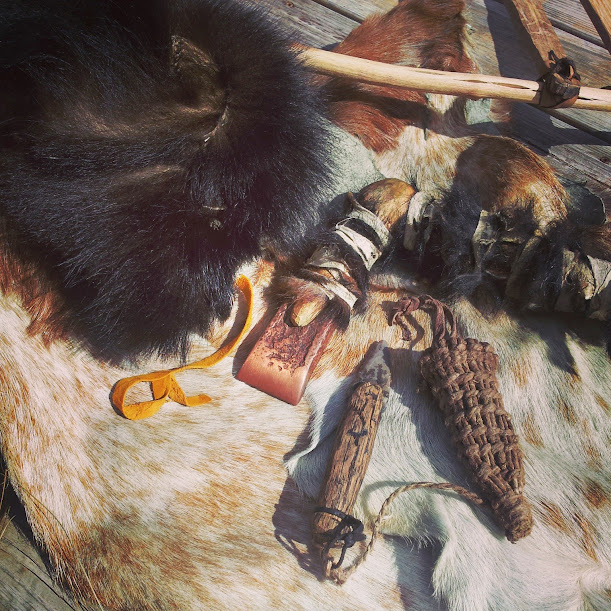 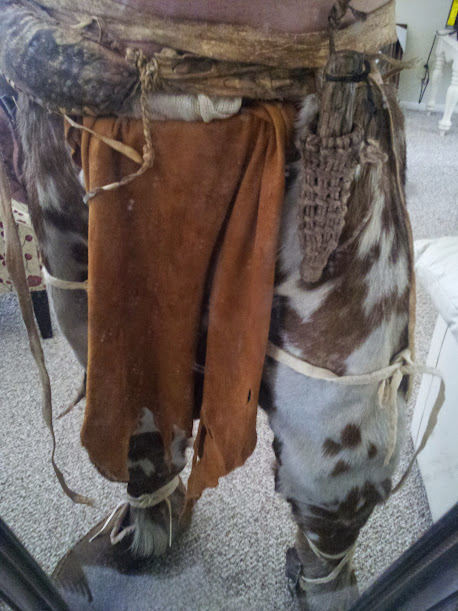 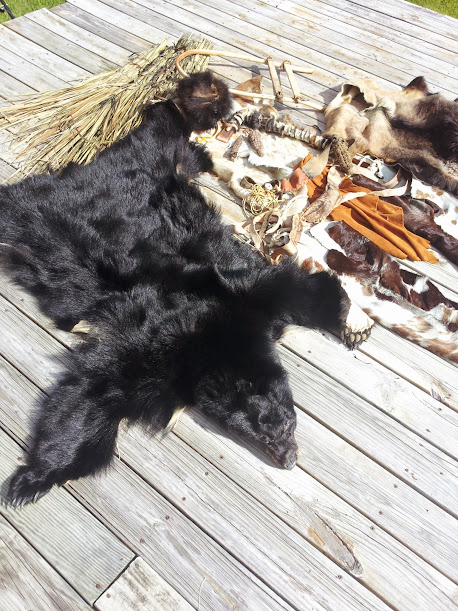 Lots of fine tuning and from here out its training Time
Posted by Unknown at 2:56 PM No comments:

Got a cool last assignment today the property was gonna have a S'more session at one of the fire pits and needed some sticks.They had some one footers thats way to short for Mallow roasting...with the use of Musk-oxen mind pwer I suggested I went and Got some Propper Sticks(Waved hand) My Boss said Hey why don't you go and fetch some proper sticks...I said That's a grand Idea...
And mounted my trusty EZGO!

Weather Freezy, sleety,I soaked from the days work
Thermos Check
WSK Beck Check
The thought I was going out of the normal AO was invigorating... 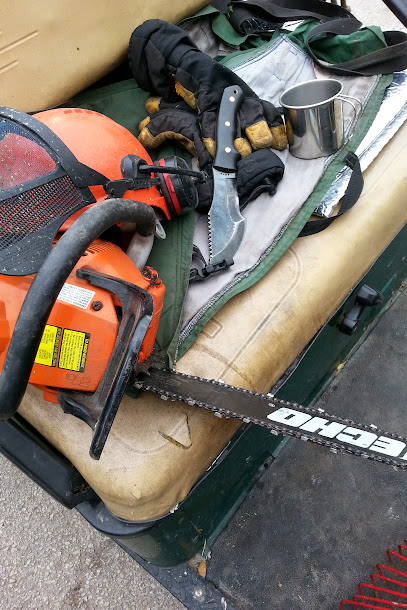 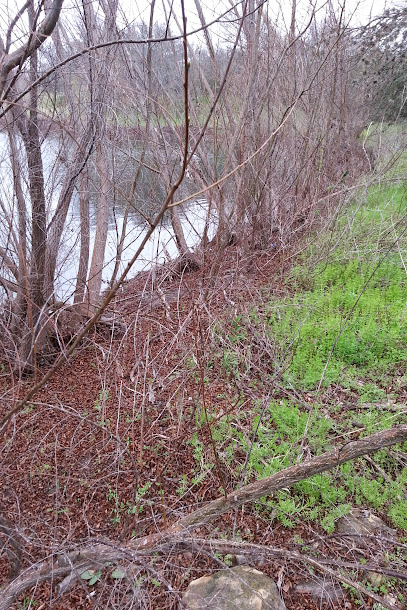 Got to one of the lakes and did a quick check of the area...
Found a stove part and a Trident Pitch fork...One less thing More on that later... 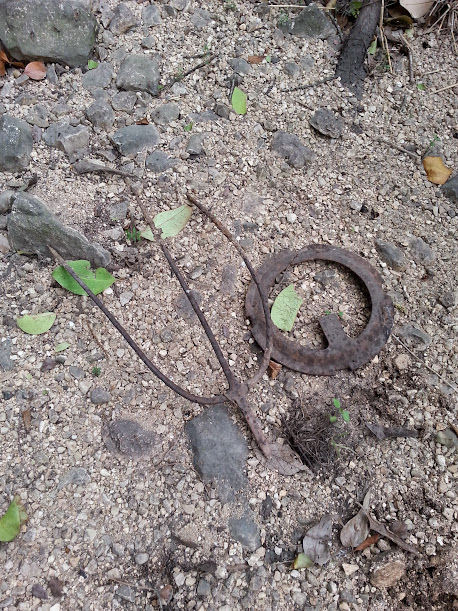 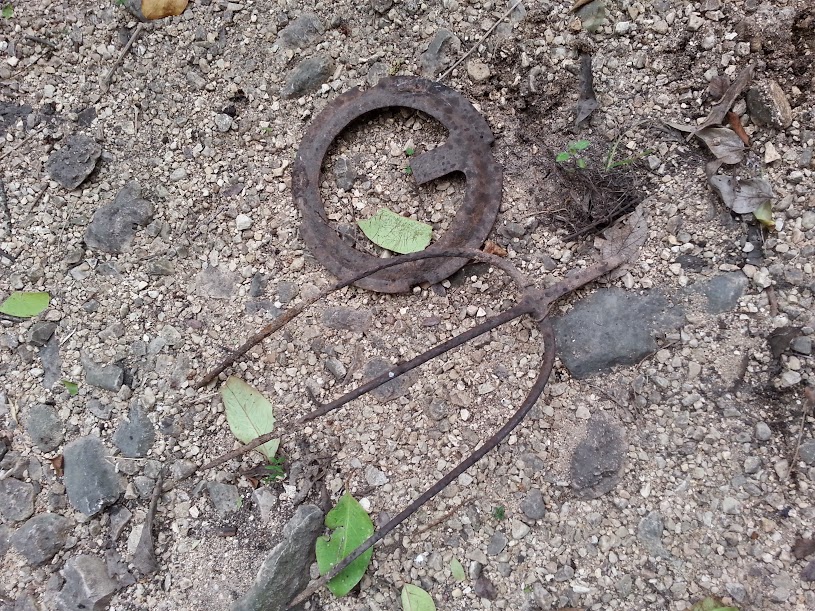 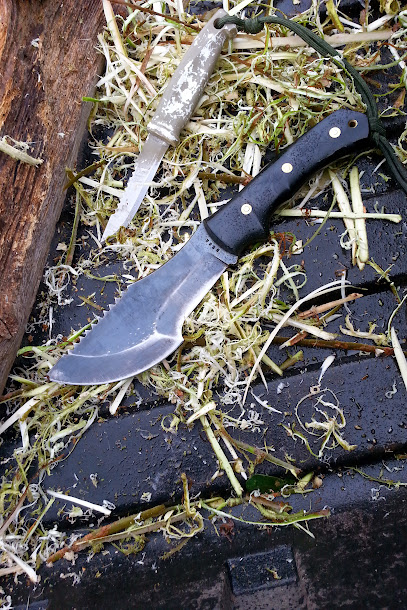 I gather the good straight'ns and after a little 90* scrape with the Beck all little knots and nubs removed I used a cheap stainless rapala bait knife I carry to sharpen the points actual since I usedthe Beck all day on some pretty nasty woods and hadn't had a chance to clean'er up...

I used Red Bud suckers for some and the Larger were willow with a couple of tip arrangements...they should work fine for the guest It was quick work but I will be doing more Im sure soon.one of the little perks of the on coming summer as well(Musk-Oxen mind power has administered a sleeper thought of -ghosty voice- how about a singing cowboy,camfire presentation, naturalist, survival instructor dude...with a beard at the fire for the guest...More on that as well soon lol 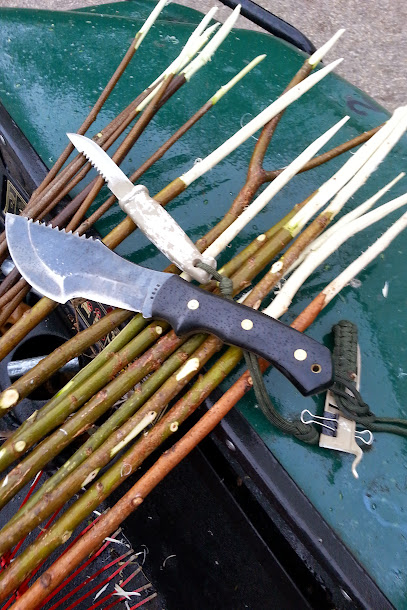 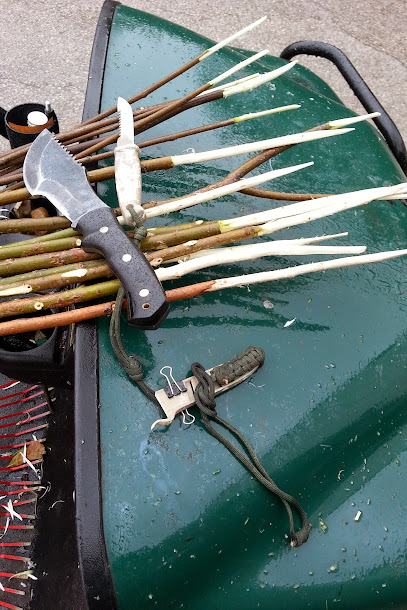 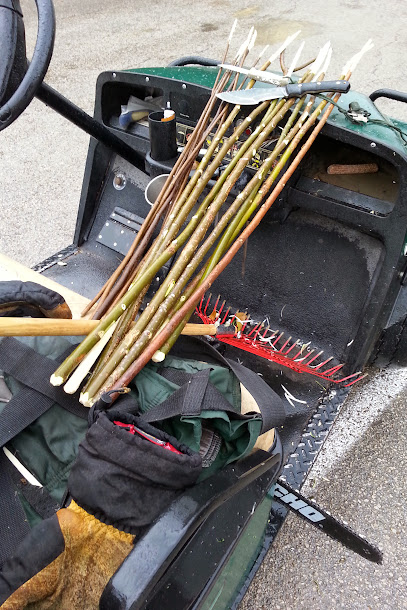 Heres the way I left them for the Rec People to find tomorrow...The gust are gonna realy like the Hiking sticks as well lol more on that later 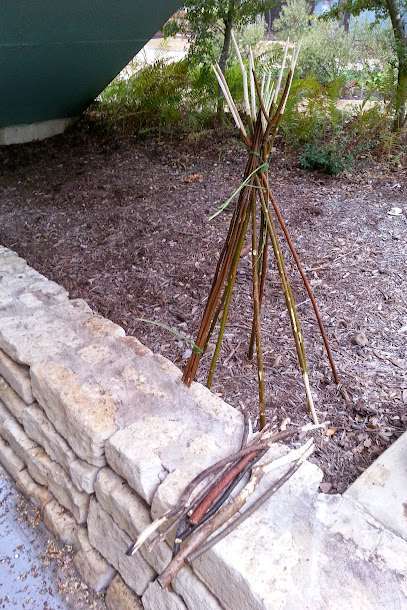 
Enjoy your Mallows and S'Mores folks
Your pal the Yodel'n Woodsman

Posted by Unknown at 8:24 PM No comments:

One of the Great plants I get to work with often is are the Agave The uses of the many types of this plant From the magical Tequila(Or Evil) the delicious Pulque a milky Agave Beer which after contact was distilled to transform and magnified with the aforementioned liquor.
The fibers of the different varieties vary in quality and some from what I understand possess anti coagulant properties and after many years of accidental stabs I concur I had some close calls with this stuff lol

contact dermatitis is common and again with the variety this varies from slight itch to help me ophra help me Tom Cruize IM ON FIRE!!! buns and even blistering...


A western gift from God to make up for not getting Birch and Maples lol...But ya gotta want it. 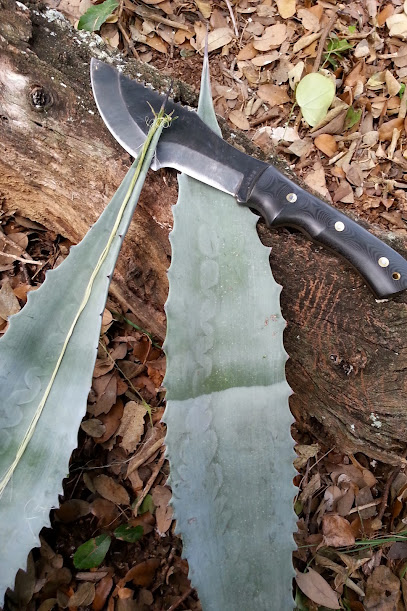 Above is a smaller 'Leaf" and a little knife work frees the needle with threads attached. a SURVIVAL TV PERSONALITY USED HIS TEETH I DO NOT RECOMEND THAT IVE SEEN FUR AND FILTH ON SOME OF THESE THAT WOULD GAG A MAGGOT and not to mention the non clotting drizzle your tongue will get if you slip it can be done with a finger nail no need to jump all off the deep ledge into the icy cold pool...a Knife make it a little cleaner is all
The single leaf yields massive amounts of fiber with some prep and elbow grease (See Bosaphs thread...link inbound) 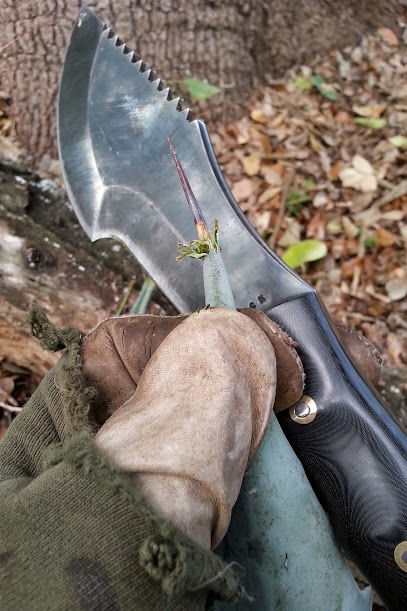 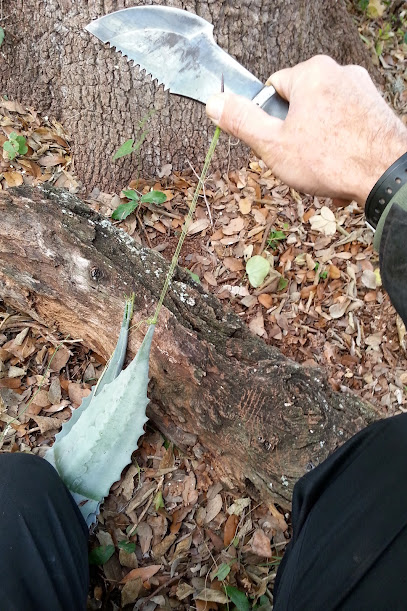 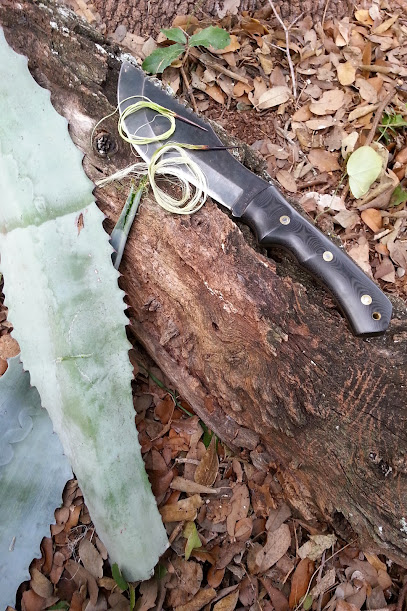 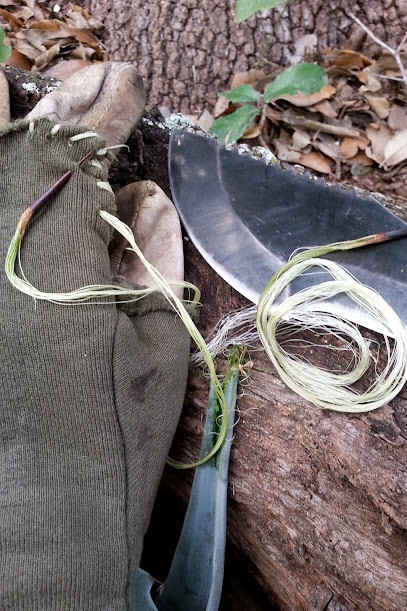 Posted by Unknown at 4:51 PM No comments:

Heres a link of more of the Build and Hopefully some other stuff I do Take care and enjoy the cool weather
Posted by Unknown at 11:07 AM 2 comments:

Otzi Pack sack is in the works...thoghts and inspiration

In all of the research I have been doing I have found and in the good pics or the artifacts the stitching varies widely from sinews to Gut to plant fibers, grasses and small varied sourced thongs. Also the methods used.
On the pack sack I did a load of experimentation with the varied style and stitching materials’ I started trying trad methods also to refresh the muscle memory in the sessions and went to a quicker method using a star punch and sail needle… that now has broke lol
The coat, when I get there will be clean as I can as far as stitching since I will want to use the thing later, but the Pack Sack I wanted to sew pull apart and fix a few times just to dive into that a little. it shows in the pack so far though I have lots of work ahead. I also wanted to show varied stitch and materials in the pack…
The leggings will be a little more of a patch stitch showcase as well
The Trad way I was doing was poke a hole ream that out with a awl and send the “Thread “ through and synch er down For holes at a time,actually 8 with four stitches…Rolling stitch as well as some others…
Four…
The llll bars has been a way to mark possessions since I was a kid I got it from the WHITNEY point blankets my… Yes… Grandpa had lol it is easy to sctatch or carve, so llll bars is a mark ive used for quite awhile… four came up years later with Ishi and many other people and I’ll be damned if llll bars weren’t found on Otzi tattoos …are ya tracking on the flow here? lol

The Net took about 6 hours I guess maybe more. I would leave it in the yard where I worked on it to mainly test the weathering of the sisal salvaged from work, it passed with flying colors
Since I first found out about netting being discovered, I have had my theory’s ,Maybe since the people that are studying the artifacts and remains have not gone through a phase of “101 ways to kill a man with a jungle hammock” lol Old joke, the Book as I pull it off the shelf is really called “24 ways to use a jungle hammock in the field” The 101 ways was the exaggerated version we came up with in the field lol… a scrape of simple net is a one of the most utilitarian things you can posses lol
Im not really a hammock guy but that book opened a can o worms that to this day I cannot close

ENTER
Dersu the Trapper.
In that book and the Kurasawa film one of the most impressive things was the use of that net that held his pack together. I used a simple method to make the net so no measurement or shuttle was used just two common knots fingers and feel,I did get a little lost since I would walk away and come back a lot but this net will be the one to go.

The fact no true pack sack was found but little bits of netting were that sent me in the direction Im going with this
Thanks again and take care MORE SOON...

folded with Frame(Grapevine made the cut)

gut bundle for clothing items when I get there material wise stained with coffee and blackwalnut...and bits

since I posted this harness of Barkthese have been left in the yard on the floorboards of my rig left in the rain and Tx heat and humidity They have remained flexable and strong so they are Go!